Let Her Run: The Movement Behind The World’s Fastest Woman

What, exactly, does it mean to be a woman? And who gets to decide that? World Athletics thinks it has the answer – and it wants athletes to conform…or else. Mokgadi Caster Semenya is fighting back – and inspiring a movement to #LetHerRun.

Caster Semenya is, by any measure, a truly amazing woman.

She’s woman enough to go from running barefoot in the village of Ga-Masehlong in Limpopo to competing on the world stage. Woman enough to win two gold medals for her country in separate Olympics, and three world titles. Woman enough to try her hand at an entirely different sport, working in the technical team of a female soccer team, and to  raise a family. But not, it seems, woman enough for World Athletics.

The champion middle-distance runner (the 800m is her specialty) has previously been forced to withdraw from international competition, and has had medals disputed, and has had to undergo shady testing and even shadier public questioning – all as a result of high testosterone levels due to an intersex condition and an International Association of Athletics Federations (now World Athletics) that has some strange ideas about the science (and indeed the ethics) behind sport and gender (and, frankly, probably race as well).

In 2019, new IAAF rules came into force preventing women such as Semenya from participating in 400m, 800m, and 1500m events unless they take medication to lower their testosterone levels. Athletes with differences of sexual developments (DSD), the regulations require, must lower their testosterone concentration to five nanomoles per litre of blood if they want to compete in these events on an international level.

Semenya refused to comply with these regulations, appealed to the Court of Arbitration for Sport – and lost.

But you don’t become a world champion by just giving up when the going gets tough – and Semenya isn’t one to just roll over.

“I refuse to let World Athletics drug me or stop me from being who I am,” Semenya told reporters, including the BBC. “Excluding female athletes or endangering our health solely because of our natural abilities puts World Athletics on the wrong side of history. I will continue to fight for the human rights of female athletes, both on the track and off the track, until we can all run free the way we were born. I know what is right and will do all I can to protect basic human rights, for young girls everywhere.”

And she’s not alone.

The South African Department of Sport and Recreation, SA human rights groups and political parties, and many others are uniting behind her – and she’s part of the Athletics South Africa group preparing for the postponed Tokyo 2020 Olympics (even if she has to run the 20m).

And now Semenya and other women athletes with elevated testosterone levels are receiving new backing in their fight to compete: the #LetHerRun campaign, which was launched recently out of San Paulo, Brazil, and aims to combat the strange ideas about the science (and indeed the ethics) that are behind World Athletics’ take on sport and gender.

LetHerRun: Standing Together Against Discrimination In Sport

#LetHerRun is a movement that embraces all women that want to run and are being kept from it – a coalition of former athletes, scientists, and doctors who say, “No woman needs to prove she’s really a woman.”

As the LetHerRun movement put it in an open call for change: “Today they are stopping [Caster Semenya]. But we say, let her run. Let her run through the tracks around the globe. Let her run and inspire the children of the world. Let her run and show that it doesn’t matter where you came from, with hard work you can achieve your dreams and goals. Let her run and be the best she can be.”

Semenya’s unique physiology might – and that’s a very big might, because, as with so much of science, it’s complicated  – help her run a little faster than she might otherwise.

But even if it does – it’s natural.

Should some basketballers not be allowed in the WNBA 9 (or the NBA, for that matter) because they’re taller than their fellows? Or should Michael Phelps not have been allowed to dominate the pool because of his unique and optimally-shaped swimming body? Or Nordic skier Eero Mäntyranta have had his Olympic medals revoked for a unique mutation that allowed him to produce more red blood cells?

Should we not, as David Epstein points out in his popular TED talk, celebrate the natural gifts of certain athletes – and recognize that those gifts, properly utilized, help push the bounds of what we’d previously considered possible?

And given the sporting world’s shameful history of sex testing (highlighted in the recent film, #LetHerRun, which portrays the “nude parades” and embarrassment women athletes had to endure in order to compete, should World Athletics be allowed to determine just who gets to be considered woman enough? 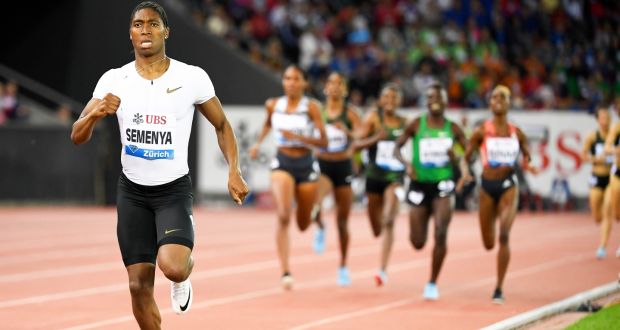 LetHerRun ambassador – and former Olympic champion Jackie Silva – believes that sex testing should be abolished and questions why only women get tested and not men.

“The world is changing, people are born with no gender, it’s all coming now, we should be discussing all these things, not this whole ‘are you women enough’,” she said: “No woman should have to prove she’s a woman.”

And Caster Semenya is not going to let herself be defined by anyone.

Editorial: Let’s Level The Playing Field (And Everything Else As Well)
Scroll to top